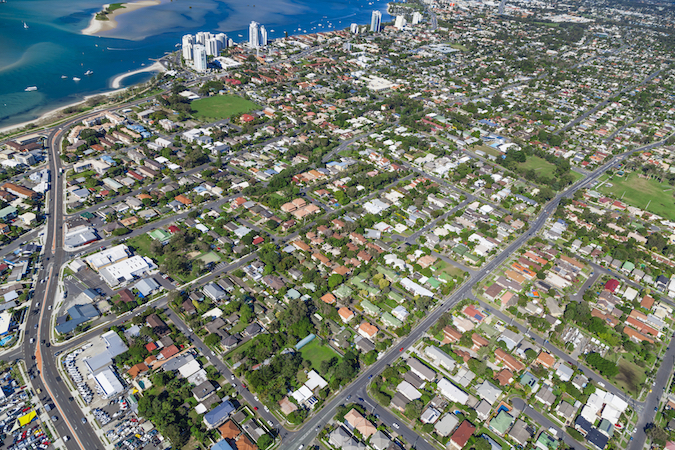 Investor property mortgages undergo high levels of scrutiny from the media, politicians and the regulators.  While Australia is well served by a large number of lenders competing for a share of the $500+ billion market, according to new Consumer Atlas research by DBM Consultants, its results show that customers vary widely in their rating of their investment property home loana nd it would be worthwhile shopping around.

DBM’s Research Director, Dhruba Gupta, said the variations came down, in part, to customer service. “While the Big 4 banks would be expected to have similar products and pricing policies across the nation, they clearly appear to vary in how their products are delivered in the different markets.”

Property investors borrowing from one of the Big 4  rated their satisfaction with their investment mortgage (average of 7.1 out of 10) similar to non-Big 4 banks (average of 7.2 out of 10). While there was not much difference among the Big 4 overall (who between them account for about 80% of the market), there was a wide variation in the ratings among the non-Big 4 banks and non-bank lenders.

“In the eastern states, for example, a non-major lender rated highest whilst in SA and WA, a Big 4 occupied top spot. Online bank ING (8.2) was rated the best in NSW, whilst Bendigo Bank (8.1) rated highest in Victoria.  Heritage Bank scored best in Queensland (8.2). In SA, both Westpac and ANZ shared first position while in WA, CBA was the stand out leader across all mortgage providers.”

“With the restrictions imposed by APRA on investor borrowing with the Big 4, they need to be more vigilant in protecting their share of the eastern states market. They have the most to lose,” he said.

Among the Big 4 there were inconsistencies in the investor property customer ratings across  operating regions.  Westpac attracted the most polarised views across the nation, with its SA customers being the most satisfied (7.5), well ahead of its least satisfied customers in Victoria (6.4). Customers of CBA were more consistently rated where Victorian customers gave the highest ratings (7.5) and NSW customers the lowest (7.0).

Lender ratings were also found to be rated differently depending on whether customers lived in metro and non-metropolitan areas. Customers in non-metropolitan areas rated Bendigo Bank (+1.0), Bank of Queensland (+0.8), NAB (+0.7) and Westpac (+0.5) significantly higher than investor property borrowers living in metropolitan areas.  On the other hand, CBA was rated significantly higher in metro areas (+0.6).  Mr Gupta said that “the differences reflected, in part, to the different strengths of the sales and service activities among the competitors”. 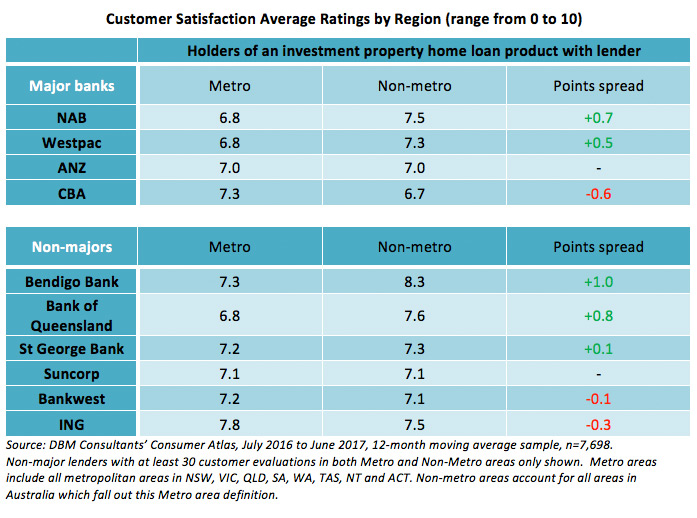 Customer ratings also varied over time across providers.  Some improved their ratings while others declined.  Investment mortgages from Bank SA (+1.5), ME Bank (+1.2) and ING (+0.5) were rated higher while St. George (-0.5), Bankwest (-0.6) and Suncorp (-1.5) ratings declined over time.  The Big 4 banks were relatively more consistently rated than the smaller banks and non-bank lenders.  Only NAB registered significantly improved ratings over time.

“These results suggest that some institutions provide a better experience during sign-up but over time do not follow-up with the same level of service over the life of the loan.  They could be vulnerable to defection when the customer is in the market for their next loan product.  Others improve their servicing over time as they become more familiar with the customer and are more likely to retain the valuable mortgage business,” said Mr Gupta. 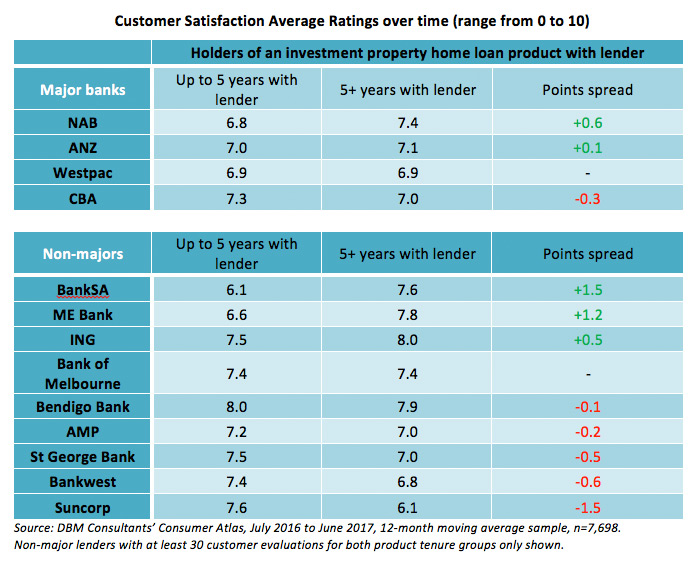 “Overall, the results from customer ratings are telling us that the providers of mortgages for investment properties vary widely in what they offer and there is no one that is consistently top rated across all the markets they serve.  It should therefore pay to shop around especially among the lenders that are well regarded in each market.”